What Year was Dil set in? 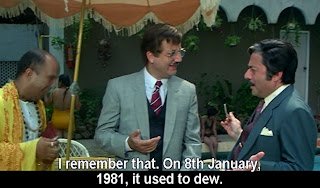 Ok, so when I watch movies I assume that they are set in the year they where filmed/released, unless it mentions otherwise. Like Dhoom was released in 2004 so I believed that it was set in the year 2004. One day when I was watching Dil (Madhuri Dixit & Aamir Khan) and at one point in the movie Madhu's (Madhuri Dixit) dad is asked Madhu birth date, he says 1981, the thing is that the movie was released in 1990 so by calculations (if she's 18) she's only supposed to be 9 (1981-1990) (if in the film she is 18). but if we go by the date in the film then it would mean that the movie was set in 1999 (1981 + 18). There is nothing 1999 about the movie! Wouldn't it have been easier if they would ave just said that Madhu was born in 1972? I just that it was real weird and un-useful, almost like this post!