Sanjeev Kumar, filmland's most amiable and eligible bachelor is a loner today! 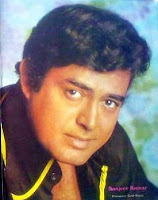 Sanjeev Kumar, filmland's most amiable and eligible bachelor is a loner today!
Can you picture before you Sanjeev Kumar, dressed in spotless white dhoti-kurta and a cap on his head, looking every inch the Zariwala he is, going around the sacred fire, hand in hand with a blushing bride? Sanjeev has so much goodwill in the film world and outside that we are sure there will be unmistakable joy and cheer on the day he walks to the altar.

The altar has been sadly and systematically eluding him, almost with a vengeance, in spite of his best efforts.
He wants to get married. His mother is keen that he brings her a bahu.
That rang a bell and Cine Blitz offered to play Cupid.

Who'll be the lucky one? Girls, can you picture yourself as the Zariwala bride? Do you think you can be the ideal one in his life? If yes, send us your picture, in profile and full figure. Write to us 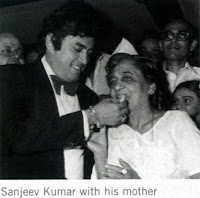 about your family background, educational qualifications, accomplishments or aspirations, age, hobbies and so on.

Sanjeev Kumar has a fascination for girls who are utterly charming, who are neither lean nor amply loaded! He has a weakness for achievers, whether academic or otherwise and prefers to get married to a girl outside his profession. Though caste is no bar, the family prefers a Hindu girl.

Sanjeev Kumar?s mother is keen to see him married in her lifetime. He is successful and rich, but a loner and that bothers me no end, says she worriedly.
Marriage to a star is no bed of roses, unless the girl is sensible enough to make the home a happy one. Being a star naturally he has a tremendous teenage girl following and he can be, and he is, utterly charming to them. He is a bit of a flirt and it gives him a terrific kick to be that way, admits the mother laughingly.

Cine Blitz will personally hand over the proposals to Sanjeev Kumar's mother and her favourite girl?s photo will then be published in Cine Blitz. Negotiations will be conducted between the respective families.

I wonder if this article was written before he had a crush on Hema Malini or after? The sad thing is that he never got married, even though Sulakshana Pandit was head over heels in love with him ( I will post that article too).

Awww that's too bad he never got married. He was just such a noble man and would have made a fantastic husband. I heard he stayed away from getting married because of his health problems. Not sure whether that's true at all. Didn't know about the Pandit gal being in love with him. But I mean who wouldn't be right? He's just too adorable and handsome.

Btw, you have THE MOST FANTASTIC collection of bollywood photos ever. No Bollywood boys though.. I wonder why. Thanks so much for putting them up on picasa. It's very nice of you and hats off to your efforts, I say!

Nice to have discovered this blog. When are you sharing the second interview you talked about at the end of this post? Thanks in advance, Karen. :)

Oh no I do have pics of Bollwood actors too, its just that I havent posted the links, but will know! Glad you liked the pics and thankyou very much!

I really like when people are expressing their opinion and thought. So I like the way you are writing

You have really great taste on catch article titles, even when you are not interested in this topic you push to read it

I feel so sorry for him he seemed such a sensitive soul. After having his heart broken by hema he seems to have just given up on life. I would have fainted if he'd proposed to me!!! Hemas morals and choice of husband is dubious anyway (marrying an already married man). Hope he is at peace now.

Hi Karan
In reply to your comment about his crush on Hema -I have a stardust magazine from 1973. He proposed to her that year and according to the article both Sanjeev and Hema liked each other and Hemas mother encouraged the relationship but when Sanjeev asked for her hand in marriage his condition was she stopped acting. in fear of losing her cash cow Hemas mother turned down the proposal. As we know Sanjeev was devastated and started to drink etc sad story. then Hema went on to marry a man with a wife and four kids. i know which man id have chosen!

it is true sanjeev proposed to hema. but he secretly loved jaya bhaduri. but he coudn't publicly declare it because she was already in relationship w/ amitabh. after he found out she was engaged, he proposed to hema. but her or her mom rejected. perhaps due to his drinking or perhaps due to the fact he didn't want her to act after marraige. it is also said he was also interested later in leena chandravakar and neeta mehta...