Ok, I just got this book from the library called "A Pictorial History of Indian Cinema" and it was published in 1979, so it has a lot of rare pictures that I have never seen before ( I will upload some of the pic later) and well there is one chapter on censorship and in that chapter they have a uncensored pic from the movie 5 RIFLES (by I.S. Johar) in which is quite something. Cuz in Indian films they do show nudity but not like fully, its always covered up or something. But in this picture there's five girls and all of them don't have their tops on, their just standing their with guns. Needless to say this bit isn't in the movie (as I'm told). All the girls to me seem unknown so I thought it would some C grade film and so checked it on imdb.com and on there it has Shashi Kapoor and Rajesh Khanna in it. Well if this kinda of stuff was cut out in the 70's then what kinda of stuff are they cutting out today! Scroll Down and you can see the pic! 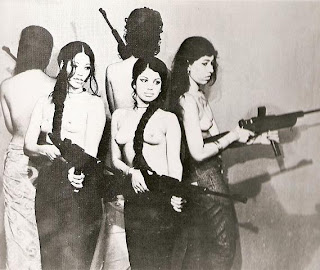 whuttt. omg. i am "shell" shocked!

I was also recently flabbergasted upon seeing Dev Anand's "Gangster"- sunno how that passed the sensors! must post review soon.

Wow! I'll have to try and get the book. Thanks for the information.
All the best,
Sita-ji

I redirected from Memsaab to Sitaji to Karen and boy am I glad!

Five Rifles had 'look-alikes', which IS johar made use of shamelessly! LOL He was hilarious.

I think he was the first one to come out with the idea of using these look-alikes, much before Ramgad Ke Sholay.

Continue with the good work (read about you in Sitaji's block)

never seen this 5 rifle pic in any book. amazing...u have great collection of yesteryears. thanks for arranging all to us. may i get your email address. mine is devengehlot@yahoo.co.in

Hi - this is interesting. The movie 5 rifles has IS Johar, probably some relation of his as the lead girl, and not Sashi Kapoor & Rajesh Khanna but lookalikes Shahi Kapoor & Rakesh Khanna.

IS Johar is Ambika Johar's father. I just hope she didnt reveal in the movie.