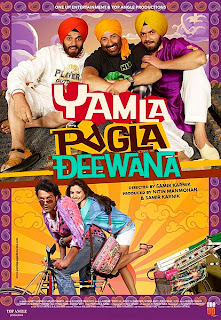 Ok so I have been loving the new promos for the movie YPD and I'm super excited to see Dharmendra on screen after Apne. Also like everyone else on the planet I love the title track that is in the promos, the original Yamla Pagla Deewana song with Mohd. Rafi's voice. But i just listened to the full soundtrack on bollywood hungama and the Mohd. Rafi version of the song is not on the album! The version that they have on album is in Sonu Nigam's voice and it absolutely sucks! Sonu Nigam's voice is way to soft for this energetic song and could not pull it off! I'm super disappointed and confused as to why the Mohd. Rafi version is nowhere to be found. When in all of the promos that's what you hear! There was even an article out a few days ago in which the makers of the film said that they canned the idea of remixing the song because it didn't sound as good as the orignal. So why the hell did they decide to change their decision at the last minute? I'm supper pissed right now for this false advertisement!

P.S. the song Charha De Rang by Rahul Seth (the 4:22 one) is really good, i could of done without all of the other singers in the song. I wish they had just kept it soft and mellow with only his voice. Why was there the need to have this song in 4 versions?

Listen to the soundtrack:
http://www.bollywoodhungama.com/movies/audiolisting/14264/index.html

Labels: ok so ive been loving the