Found another gem on Ebay today! Seller, onestcdotnet has listed a picture of Premnath and Kamini Kaushal kissing. It was taken on the sets of 'Raja Kaka' whici was released in 1974. I searched this movie in Google and an article came up that said that the kissing scene was between Nadira and Premnath, whereas the seller says it was between Premnath and Kamini Kashaul. There is writing on the back of the picture which is a little hard to read, it says Kamini's name on it but I'm not sure if it's her in the picture. I haven't seen this movie, has anybody else? 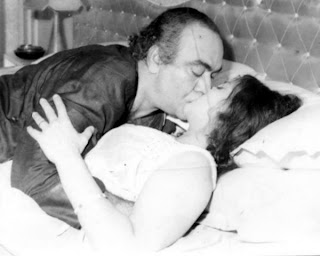 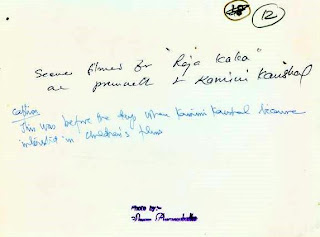 Dear KAREN,
Am so absolutely glad that better sense prevailed and You did not abort this blog as You wanted to do at one point several years ago, Have mispkaced Your email id so cud not connect..Wonder if You remember Me..Am THE LIP SHANDIL the film journalist from India who was connected with You first on hubs and later thru this very blog., Drop Me a line at dalip.treasurefilms@yahoo.co.in to get in touch again!