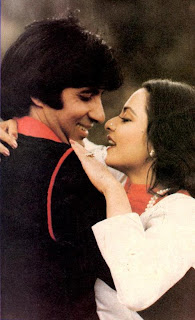 Ok, so we all know about how back in the day Rekha and Amitabh had a thing, right? But whenever you ask these two they always vehemently deny everything and anything and say it's all media created. If it is all media created then could somebody please answer these questions:

1) Why haven't they worked in a movie together since 1981, Silsla?(They have appeared in the same movies after this but they did not have any scenes together and one or the other always did a guest appearance.)

2) Why do they avoid each other at all functions or public places? 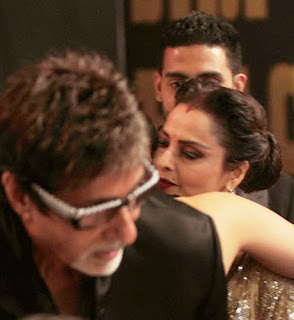 One of the most talked about moments of the night. Why couldn't Amitabh just sit there and say hello. 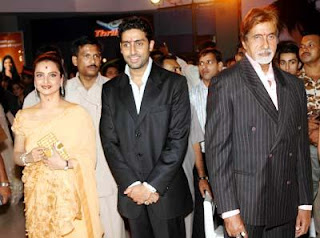 The release of Sarkar, complety ignores her presence. Amitabh should at laest pose properly for the picture, we can see you are together you idiot!
3) Why are they always in a hurry to end a question where the other person's name arises?
Honest to god it really makes me mad when they do this because they should at least have the guts to say that they had a relationship together and now its over, why are they so reluctant to do this? 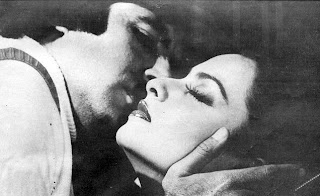 Look at how close they are to eachother! I don't think Amitabh has taken such pictures with any other actress, not even his wife!

Amitabh made it very apparent at the recent Filmfare awards that he did not want anything to do with her, when he walked away when she came over to say hi. Like its so bad between these two that they can't even say hello? Man this makes me mad!

theyre both a little creepy when it coems to each other.he acts like he doesnt know her and shes a germ and she talks about him like hes a god.

JJC that is so true they are weird about eachother, why can't they be civil like normal people.

Is it just me or does Rekha only wear sindoor in her hair when Amitabh is goign to be a t the sam place.

They can deny as much as they like now, but a lot of people in India know that they were going out together & very much an item at one time.

Not wanting to name names, but an acquaintance, who worked with Yash Chopra amongst others, told us that while traveling he noticed Rekha used to have 'Rekha Bachchan' as the name on her vanity case.

Also, they would spend an awful long time together in their dressing rooms ! This was even on the sets of Silsila with poor Jaya waiting for them on the sets ...

In fact Yash Chopra deliberately made that film to cash in on their affair.

Another thing was around the same time he was carrying on with poor Praveen Babi. I was at his concert in London in 1985 where she also appeared. They danced & mimed to the song 'Angregi Mein Kahte Hein I Love You' from 'Khuddar'.

Soon after she disappeared suffering from a nervous breakdown. When she did eventually return, in all her interviews she would constantly blame him for causing it ...

However, he is very well connected & she was just made out to be mentally imbalanced - how sad ...

btw, love your pictures etc., it's a pity you don't get more comments & feedback. Does that bother you considering how much time you must have spent scanning them etc. ?

I think when it comes to Amitabh Bachchan, Rekha is a little crazy, so I don't doubt ot for a second that her vanity case said that. I also believe that they spent a lot of time together on the sets of their movies. I think i saw it on tv, when the director was casting the heroine opposite Amitabh Jaya didn't want Rekha, and she said that she would be mighty upset if he did but on the other hand Rekha was pressuring the director to cast her opposite him or she would not let anyother heroine get the part. In the same interveiw the person said that on the sets Rekha behaved like a complete wife towards Amitabh.

I have seen Yash Chopra's interveiws on Silsila and he has always said that he did not make the movie to cash in on their affair.

I have heard of the Parveen Babi affair before and you what I knid of believe that it did happen and him leaving her probably did push further into mental problems but I do not think it was all Amitabh's fault.

I have not scanned all of the pics on this blog and albums, I have mostly found them on the internet. It is a furstrating when i dont get feedback, but there are a few people who always put in their two cents which is nice, and then their are people like you who make it all worth while!

It is a pity that Rekha can't go over this old obsession and be a free person. Or perhaps she does it all only to get attention and to tease him.

nice Blog,Gud work..i think its to save his marriage hes acting like that way to Rekha...who knows wats going on in between them..but Rekha and Amitab makes a good pair rather than Jaya Amitab,wud love to read more abt their affair...

Rekha and Amitabh affair is a ongoing mistery that would never fade away. They way they are acting toward each other might be hate or love who is to know but like some else already mentioned I think Amitabh's love is always his image not his wife or Rekha.

Amitabh still loves her, that's why he tries to deny her all the time. Your love is truly great. Don't deny nature, you are part of it.

For more on this check out :

It intrigues me though..this whole affair that they had! I mean at the end of the day they were both superstars with tons of money and fan following and all..but their affair and their craziness makes them so normal...! I mean amitabh on the one hand having fun with all these women trying to fight his married status and be with someone lovely like parveen or rekha...and rekha on the other hand trying to fight her destiny and be with a married man! and then the future..where amitabh's like ignoring her..treating her like the plague..and she is like all crazy about him! I mean i dont know..it scares me i guess!..realtionships are scary specially when they dont work out!

Mate you should stop worrying about these things leave it to them. Take a cup of coffee relax a little!

Jaya is sooo... ugly why is he still with her Rekha still looks stunning.

As far as I can remember.. post Silsila, Rekha has been associated with two Bachchan movies.. as a dubbing artiste to the leading ladies in Aakhree Rasta & Sooryavansham!

Ummm...sorry my friend whoever said she's ugly!! god! she is so not! her looks are pure and innocent ! like she is beautiful like a child ..rekha is like glamorous pretty! they both are different the type you get married to and have kids with and the other is the mistress type ..which is exaclty what happend ...I am a big fan of all three of them! love 'em all! and yea..amitabh's and rekha's chemistry was so obvious in sisila ..like woah..I mean even though it was a movie it looked so real

even if they did have a relationship i dnt think its your choice if they want to tell anyone or not its a private thing not public. just because they're actors it doesnt mean tht you can or have to know everything about them

Hi there to every single one, it's actually a good for me to pay a quick visit this website, it includes helpful Information.

My site: diet plans that work

An outstanding ѕhaгe! I have just forwaгdeԁ this onto a colleague
ωho was conducting a little resеarch οn
this. And he actuallу ordered me ԁіnner
ԁue to thе fact that I stumbled upon it fοr hіm.

.. lol. Ѕο allow mе to rеword this.
... Thanks for the meаl!! But yeah, thanx for spеnding tіme to talk about
this matter heгe on your blog. free easy ripple crochet patterns
- rippln reviews - rippln mobile

Pretty great post. I simply stumbled upon your weblog and wаnted tο saу that I've really loved browsing your weblog posts. In any case I'll be ѕubscribing to youг rsѕ feеd and ӏ'm hoping you write again soon!

Nice blog on Amit Sir get Amitabh Bachchan all update on http://guruofmovie.blogspot.in/2014/04/amitabh-bachchan.html